For more than two decades, France has reigned as the world’s most popular tourist destination, receiving 82 million foreign tourists annual. Travelers from all over the world are drawn to France’s sophisticated culture, exquisite cuisine, fine wines, romantic chateaux and picturesque countryside.

Many people immediately picture Paris when they think of France. Whilst the country’s capital is a beautiful city filled with neoclassical architecture and some of the country’s most recognizable monuments (think the Eiffel Tower), there’s a lot more to see around the country than just one city.

Try the D-Day landing beaches in Normandy on for size or the Germanic culture in the Alsace region. Visit the Loire Valley for castles and vineyards, or Brittany for its earthy Celtic culture. For more wine, there’s the globally renowned Bordeaux region – famous for you know what. There are the French Alps, with Europe’s highest peak Mont Blanc to visit. In the south, there’s the endless charm of the French Riviera, including Saint-Tropez. There’s a lot to fit in, but here are the best places to visit in France. 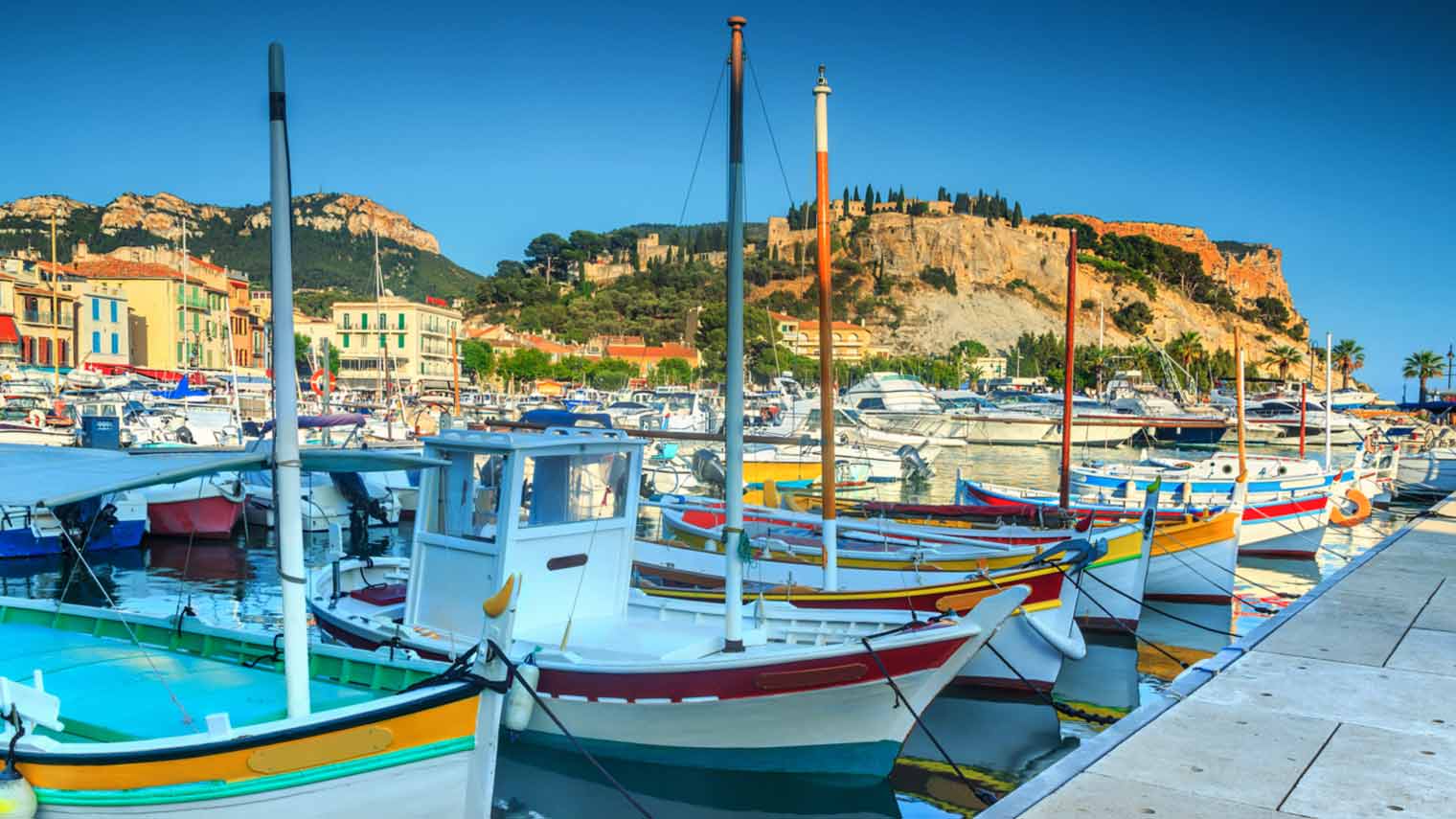 One of Europe’s oldest cities and France’s second largest city, Marseille is a major Mediterranean seaport located off the southeast coast of France. Boasting an idyllic climate, Roman ruins, medieval architecture and distinguished cultural venues, Marseille is also a working city with several universities and industries.

At the core of Marseille is its old port, Vieux Port. Dominated by two historic forts, this bustling harbor is lined with waterfront cafes, shops and bars. At the end of the harbor is the Quai des Belges where visitors can view luxury yachts, ferry boats and fishermen auctioning off their catch at the daily fish market. One of Marseille’s best natural attractions, the Calanques are a series of small inlets with astonishing blue water and majestic limestone cliffs.

Marseille is a thriving regional center of arts and culture with numerous museums, art galleries and historic buildings like La Vielle Charite and the Basilique Notre-Dame-de-la-Garde. The city also hosts a large concentration of opera houses and theatres such as Theatre Toursky.

Located in east-central France, Lyon is the capital of the Rhone department in the Rhone-Alpes region. Boasting a long history, Lyon today is the third largest city in France, known for its historic architecture, gastronomy and vibrant cultural scene.

Lyon is comprised of nine arrondissements and various neighborhoods. Each district offers its own share of interesting treasures. For example, Presqu’île is the heart of the city with its restaurants, bars and clubs while Croix-Rousse is known for its hundreds of hidden passageways known as traboules. Fourvière boasts Roman ruins and Gothic churches, and Brotteaux is the wealthy district containing the beautiful Tete d’Or park.

Vieux Lyon is the historic center featuring narrow, cobblestone streets, Renaissance architecture and landmarks like St. Jean Cathedral with its astronomical clock. Many souvenir shops and restaurants are found within this area. While Lyon frequently illuminates its major monuments year-round, the Festival of Lights is an important annual event, attracting more than 4 million people to the various celebrations of candle lightings and professional sound-and-light shows.

Strasbourg is the point where France and Germany mesh together in perfect harmony. Situated right on the border of the two countries, Strasbourg is the capital city of the Alsace region. Strasbourg serves as the seat of the European Parliament and numerous other important European institutions such as the European Court of Human Rights and the Council of Europe.

The city’s historic center, Grande Ile, is what makes Strasbourg a popular tourist destination. Here among a blend of both French and German architecture with signs in both languages, the center offers many museums and striking attractions such as the stunning Gothic cathedral, which features pink sandstone, intricate carvings and a 300-year old working, astrological clock.

One of Strasbourg’s most picturesque neighborhoods, La Petite France, is another of the city’s tourist magnets. This riverfront area is characterized by its cobblestone streets, cozy cafes and half-timbered town homes bedecked with window boxes of colorful flowers.

The arts and culture scene in Strasbourg is rife with renowned theaters like L’Opera National du Rhin and the ThÈ‚tre national de Strasbourg as well as notable art galleries and museums such as Musee des Beaux-Arts and Musee Alsacien. Great beer, wine and delectable cuisine feature flavors from both France and Germany. There are many breweries and winstubs here offering tours and free drinks. Local Alsatian food includes specialties like sauerkraut and sausage, a German noodle called spaetzle, and baeckeoffe, a meat and vegetable stew.

A popular tourist destination, the Loire Valley is a region in the center of France, regarded for its spectacular scenery, splendid chateaux, picturesque vineyards and historic villages. The Loire Valley stretches 175 miles along the Loire River, twisting and turning through some of France’s most beautiful villages such as Amboise where Leonardo da Vinci lived the last few years of his life. Other historic villages in the region include Tours, Chinon, Anglers, Saumur and Orleans. The town of Blois is significant for its chateau where French kings and aristocrats often met.

The valley’s biggest attraction is its large number of chateaux scattered throughout the rolling green hills. Ranging from grand country manors to defense fortresses and luxurious palaces, these chateaux were built by French nobility. Some of the most famous chateaux include Chambord, Amboise, Rivau, Chinon and Chenonceau.

The Loire Valley is nicknamed the “Garden of France” because of its abundance of flower gardens, fruit orchards and vineyards all made lush and fertile by the nourishment of the Cher, Loiret, Eure and Loire rivers. The valley is home to many wineries that offer tours and wine tastings.

The capital of the Gironde department in the Aquitaine region of southwestern France, Bordeaux is widely esteemed as one of the world’s largest wine-producing regions, generating more than 800 million bottles of prestigious wine brands annually.

Built upon the River Garonne just half an hour inland of the Atlantic Ocean, Bordeaux is a major port city stuffed with fine architecture, historic sites and a world-class arts and culture scene all topped off with a relaxed atmosphere.

Bordeaux’s city center, known as the Pedestrian Zone, features more than 350 historic structures and landmarks that include medieval churches, a Roman amphitheater and charming old bridges such as the Ponte de Pierre. The city also features several beautiful plazas of which the Place de la Bourse is the most stunning with its mirror-like effect.

Bordeaux’s well-developed waterfront presents several quays where tourists can shop among vibrant markets and designer outlet shops, dine in lovely restaurants or simply relax while admiring the magnificent views of the river. A visit to Bordeaux would not be complete without a drive through the surrounding wine country where tourists can admire incredible scenery, picturesque villages, vineyards and chateaux. Every June, the city hosts its spectacular Festival of Wine in tandem with the Festival of the River. For nightlife, the city’s waterfront quays offer pubs and nightclubs.

If you want to mingle with the hoi polloi of French society in the south of France, the Luberon is the place to do it. It’s a haven for French society, as well as American and British visitors who come during the summer months to experience charming villages. This region in central Provence took off as a tourist destination after Peter Mayle published his books about life in Provence. With its lush forests, fields of lavender, farmers markets and colorfully painted houses, you’ll soon see why the Luberon is such a tourist magnet. A great souvenir is pottery from the village of Oppede le Vieux that still maintains its Middle Ages ambiance.

Rising up from the midst of vast mud flats and some of Europe’s most powerful tidal waves is the rocky island of Mont Saint-Michel, located off France’s northwestern coast in Normandy.

The tidal island is one of the most popular places to visit in France for its construction of medieval structures built as if stacked upon one another and crowned with the star attraction, the Abbey of Mont Saint-Michel. The awe-inspiring abbey was built by devoted monks in 708 AD after the Bishop of Avranches was allegedly visited by the Archangel Michael.

Unless you have weeks or months to spend in the scenic Dordogne region of southwestern France, you’re going to pick and choose the things you want to see. There is just so much to see and do here, beginning with picture-postcard villages and chateaus, including the well-preserved Chateau de Baynac, a hilltop castle.

The scenery is pretty awesome, too, with the Dordogne River running through it. The Dordogne also has some of the best prehistoric cave art in France. The walls of Lascaux feature mainly animals. Unfortunately, they’re closed to the public now, but a replica is a must-see.

Located on the French coast of the Mediterranean Sea, the French Riviera (Cote d’ Azur) is the playground for the rich, famous and hordes of tourists. There is no official boundary, but it is usually considered to extend from the Italian border in the east to Saint-Tropez, Hyères, Toulon, or Cassis in the west.

Although the Riviera is famous for the glamour of St. Tropez, Monaco or the Cannes Film Festival, there are many other less well known destinations, such as the perched villages of Eze and Saint-Paul de Vence, and the perfumeries of Grasse to name a few. The Riviera has been the inspiration for many well-known artists such as Picasso and many of their works are on display in local museums and art galleries. The region enjoys a wonderfully mild to warm climate all year round, despite being one of the more northerly coasts on the whole Mediterranean.

Attracting more than 45 million visitors annually, Paris is the world’s most popular tourist destination. Dubbed various nicknames like the City of Lights, City of Love and Capital of Fashion, Paris is the capital of France, known for its romantic ambiance, gastronomy, fashion and art.

While Paris is comprised of 20 districts, called arrondissements, featuring their own distinct character and attractions, the city is well known for its iconic landmarks like the Eiffel Tower, Arc de Triomphe, Versailles Palace, Sacre-Coeur and Notre Dame Cathedral. Paris is also home to some of the world’s finest museums that include the Louvre Museum and Musee d’Orsay. What’s more, Paris boasts magnificent gardens such as the Luxembourg Gardens.

Scientists unravel secrets from the faults in our genes